An ongoing review
The Great War At Sea is a series of board wargames covering pretty much all aspects of naval conflict in WW1(and hypothetically beyond).

There are plenty of right-ups and discussions on Boardgamegeek so that is a great place to look at the family of games.

The review is going to concentrate on playing the games, looking at optional rule amendments and eventually looking at other games in the series.

Firstly the game parts and how they stack-up:
Learning the Rules
For the basic strategic & tactical rules I found the easiest way was to create some Quick Reference Sheets (QRS) for the game. This helped me glean over the various sections and learn whilst writing. We have published these QRS free of charge. They will be enlarged as we try out more games mechanics (such as aircraft) and other modules (such as Dreadnought). 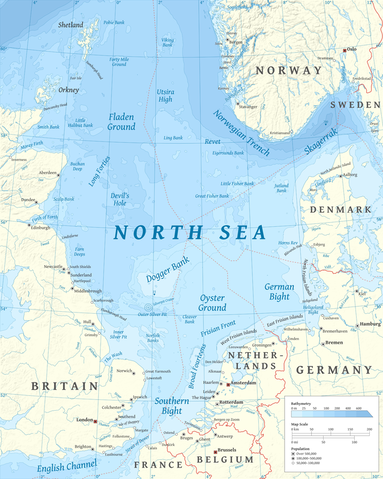 By Halava - Own work using en:GRASS GIS, en:Inkscape and en:GIMP.Data sources:Elevation and bathymetry data from NGDC ETOPO1Coastlines, rivers and borders from NGDC World Data Bank IIExclusive economic zones from EurosionCities from OpenStreetMap (manually)Map Projection: Universal Transverse MercatorTypeface: Gentium Book Basic from SIL International, CC BY-SA 3.0, https://commons.wikimedia.org/w/index.php?curid=11707771
Playing Dogger Bank 1915
Ok firstly the game was quick with setup time being a couple of minutes. The scenario only has a few ships per side so that is to be expected. The Scenario details were clear except for the Victory Conditions.

Play was straight forward following a strict 20 segment sequence of play (twice) and then the game ended. The sequence included multiple gunnery, movement & torpedo actions and was simple enough.

Pros & Cons
The Scenario Itself
Ok as an introductory scenario is is highly suitable however there were more (lighter) ships available, as well as the odd seaplane & Zeppelin. Additionally communication limitations were a major factor in the battle.

The lighter ships did not really get involved (other than some spotting in the early phases, but the German Torpedo Boats were nearly ordered on a potentially suicidal torpedo run to save SMS Blücher.

Below are the record sheet details required to play this scenario. Set-up &  Victory Conditions are in the Scenario Booklet. Please note that the armour symbols have changed slightly.

We will be providing a more complete ORBAT with additional ships & boats (and optionally aircraft).

Download File
Great War at Sea: Jutland Unofficial Rule Amendments
Here are some rules we have put together from play-testing and from other peoples ideas from the Web. As we progress through our play-testing we will amend, subtract & add to these rules.

Download File
Playing Jutland, Opening Moves 1916 [The Battle of Dogger Bank re-match]
The game was quick with setup time being a few minutes. The scenario only has several ships per side to start off with so that is to be expected. The Scenario details were clear and so were the Victory Conditions.

Play was straight forward following a strict 20 segment sequence of play for 3+ turns and then the game ended. The sequence included multiple gunnery, movement & torpedo actions and was picked up quickly by the opposing players.

We used a number of unofficial mods (some of which seem to be in later rules sets).

Pros & Cons
The Scenario Itself
Ok we think that with the mods that it is a well-balanced scenario and deserves a few more replays. Without the mods the Germans are on a 50/50 chance of losing purely against the Royal Navy's Battle Cruisers.....

The scenario basically depends on the German Imperial Navy rolling more critical hits than the Brits (and then under the standard rules rolling double ones) and in our game they didn't... the ratio of Critical Hits was 3:1 in favour of the Royal Navy.

Here are the Scenario record sheet details for the ships.

Download File
Next we are going to try the same scenario using 1/6000th scale miniatures with 3" equalling one hex on the Tactical Map. Pictures to follow. As part of our Tactical Display Map game we used some of the following deployment sheets to work with the additional rules: