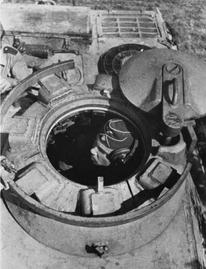 In practical terms there are four major factors  and three minor factors involved.


Observation Ability
A well designed turret cupola or indeed hatch allowed excellent field of view for some nations' tank commanders (notably German, Italian & American as well as some British) and when buttoned-up a variety of vulnerable vision slits or periscopes (particularly Shermans) and later for many, armoured glass vision ports (German tank crews had these and spares readily available from early in the war, whilst Soviet tanks had less vision ports with low quality armoured glass).

The late war Germans designs uniquely had rising cupolas for the Tank Commander giving him protected good quality vision. Soviet & French tanks commanders had probably the worst hatch designs to cope with. Periscopes were susceptible to damage early in a firefight or artillery barrage, thus forcing the crew to fight almost blind.

Despite the equipment provided  to many crews they preferred to fight unbuttoned whenever there was no significant threat from enemy infantry or artillery. Many rules tend not to emphasis the effect of small arms fire on AFVs. Only when AFVs and/or accompanying infantry were able to defeat enemy infantry could they be a decisive factor on the battlefield.

Crew Layout
Tank small turrets were a major issue when it came to efficiency. Many pre-war designs produced cramped 2-man turrets. This created a major issues when engaging the enemy as the commander often had two or more significant roles to deal with. This critically slows down: A well-designed crew layout, aided by good internal communications, increases the combat efficiency of a tank & enclosed self-propelled gun (such as the ubiquitous Stug III) whereas other AFVs such as  the Marder, Archer or M10 series and towed anti-tank guns which were more vulnerable in a number of respects suffered far less for all these factors.

Quality of Sight Optics
German sight optics were renowned for their quality and surpassed any of the Soviet and indeed the Allied sights. British & American sights were adequate however where German sights proved their worth was at long range engagements of 1000 yds/m or greater (typically preferred engagement ranges would be over 500 yds/m).

Provided that your gun was both accurate enough and its ammunition had the penetrative ability to destroy or disable enemy AFVs or enemy positions at long range then the German sights were worthwhile. The downside was that if these far superior sights were damaged then they could not be fixed other than back in the factory of origin.

Gun Quality
A long-barrelled 37mm main gun was generally acceptable in 1940 but by 1941 it was virtually obsolete and by 1944 only the best 75mm - 77mm guns were acceptable as the bare minimum. The arms race was a rapid succession of improvements to combat both technological advances and thicker armour. Not only did a main gun have to take out enemy AFVs but also infantry and artillery positions.

Ammunition
Ammunition both extended the life of near-obsolete guns and increased the chances of destruction thus reducing ammunition consumption, albeit at additional resource cost. Additional penetration often came with negative features such as excessive barrel wear or reduced range. High Explosive rounds from large calibre artillery was an effective tank stopper... as French Char Bs found in 1940 when engaged by German 105mm Howitzers.

Weapon Traverse
Fast powered turret traverse is an excellent facility - provided that the tank commander has reasonably good view of the immediate battlefield area. Without this it is virtually meaningless - thus it has been relegated to a minor factor. Coupled to this as powered (electric & diesel) turrets became standard in most models as the war progressed so also did average engagement ranges. 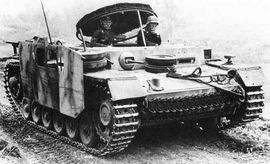