The Origin & Development
of the Hoplite 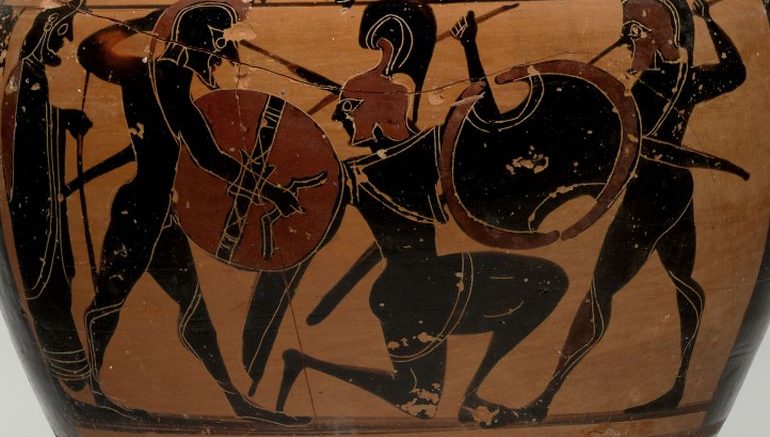 From a wargamer's perspective Hoplite warfare is grounded in mass phalanx formations in long linear lines with a stronger right wing,  rather than left, with each man in these tightly packed "shieldwalls" mutually supporting the other, with the only major differences being how much armour (which is acknowledged that it became less as time progressed) and what morale class (or quality) were the troops...

But let's look at the evidence (such that it is) and relevant historical data from the Greek Dark Age to the ascendance of Macedon some 450 years later, much of it pictorial and conjectural until the 6th Century BC

Combat in the latter stages of the Dark Age was predominantly with javelin or light spear based with soldiers fighting in a relatively loose formation, supported by light troops. From this period we start to see the military ascendance of Sparta, though not as the super troops they were to become.

However they brought a new style of fighting, a more structured approach to combat and a weapon development. So lets look at these factors and why they became popular and indeed necessary to both military power of the Greek City State as well as culturally...


As time & experience progressed though the many not-so-bloody conflicts (so City States could afford more of them) various tactics were developed and the phalanx was slowly refined and as it did so Hoplite warfare as we fight it on the wargames table came into being.

Soldiers & commanders were as able then as the modern soldier of today (we should remember all the other developments by the Greeks in this period that shows they were quite a capable & forward-thinking people). What they often did not have was technology but even so tactical finesse, though constrained until the Peloponnesian War (431–404 BC) did undoubtedly continue to develop.

Principally armour was reduced as formations became tighter. This intentionally or otherwise allowed larger numbers of combatants which then led to additional recruitment, training & logistical issues.... a feature that helped bring the end to the dominance of Sparta in mainland Greece. However the flexibility of the non-professional Athenians at Marathon & Salamis and the superb skills of the 300 at Thermopylae as well as the later March of the 10,000 must only touch on the overall flexibility of these troops. To say the majority were virtually untrained (excluding the more famous exceptions) is an exaggeration, though not unknown (and with frequently dire results).

If we look at the sports of the original Olympic Games (included running, long jump, shot put, javelin, boxing, pankration (a combination of boxing a wrestling with few rules) and equestrian events) they do not indicate that individual fighting skills had been discarded. Certainly at least party of Spartan military training covered the rough and tumble of disorganised individual combat and why would the most professional & organised Hoplite Army bother with these skills if it was restricted to 'Phalanx Combat'?

Unlike the other races, which were generally run in the nude, the hoplitodromos required competitors to run wearing the helmet and greaves of the hoplite  from which the race took its name. Runners also carried the hoplites' bronze-covered wood shield, bringing the total encumbrance to at least 50 pounds. After 450 BC, the use of greaves was abandoned as a standard piece of equipment (presumably because they had already lost their military necessity).

We should not look at the Hoplite Phalanx as a simple formation that was created at some point in early Greek history but that it was an unstructured series of natural developments by different City States that complimented the societies that the citizens (and sometimes slaves) of each of the City States fought to protect. Indeed it could be said that Alexander's Army, albeit non-Greek, was the epitome of this principle & development.

The established theories: Developed by Anthony Snodgrass, the Gradualist theory states that the Hoplite style of battle developed in a series of steps as a result of innovations in armour and weaponry. Chronologically dating the archeological findings of hoplite armour and using the findings to approximate the development of the phalanx formation, Snodgrass claims that the transition took approximately 100 years to complete between 750 & 650 BC. This is still a rapid transformation based on both the starting point the frequency of formal warfare and required the suitable combination of the various combinations of foes throughout the period (Northern City States undoubtedly did not convert within this time period) as well as production of equipments and progressive leadership & will. The Rapid adoption theory was developed by historians Paul Cartledge and Victor Hanson. The historians believe that the phalanx was created individually by military forces, but was so effective that others had to immediately adapt their way of war to combat the formation. The Phalanx might have been created though the likelihood that it was in a form represented on the wargames table is at best highly unlikely until the middle of the 5th Cent BC. The comments above also apply. Developed by Hans Van Wees, the Extended gradualist theory is the most lengthy of the three popular transition theories. Van Wees depicts iconography found on pots of the Dark Ages believing that the foundation of the phalanx formation was birthed during this time. Specifically, he uses an example of the Chigi Vase to point out that hoplite soldiers were carrying normal spears as well as javelins on their backs. Hoplites, as they are generally depicted on the wargames table, did not carry long range weapons including javelins and, additionally, much of the tactical doctrine available to the wargame enthusiast is not available (the speedy advance at the Battle of Marathon being one famous example).
Common Greek Military Terminology from the 'Classical' period
Or 'Why we might need to re-look at the way we portray "Hoplite Warfare" on the wargames table'. For the record the Greek name for the shield carried by the Hoplite is not 'Hoplon' but Aspis koilè (Aspis is the general name for shield).
Conclusions
It is likely that individual City States gradually developed their warring bands of Infantry from ill-equipped light troops combined with small groups of noble warriors (able to buy some or all of what became a full panoply of armour) and armed with spear and/or javelin and sword to larger trained bands of lesser equipped but still moderately-well armoured 'Heavy Infantry' that could still fight aggressively as well as defend themselves through forming close order and even locking shields....

When the javelin was removed from general use is debatable but it was probably either during the later stages of the Lelantine War or more likely some time after when it was realised that in the formalised style of warfare javelins were inefficient in that Units would fail to close with their opponent and the battle would develop into an inefficient firefight and/or broke up the 'Phalanx' and which ultimately prolonged the result of the battle and only increased logistical issues. It is likely that the more progressive (at this point) Spartans were the first to discard the javelin in Heavy Infantry formations.

It is also possible that due to the nature of the terrain in Greece that different types of Hoplite appeared, providing additional tactical potential on the battlefield (though this is likely to be solely reflected in lesser armour). These difference could alude to both Ekdromos and Promachos units which may have fought between or within existing units and ordered to deploy as and when the need arose.

Certainly there was a higher degree of tactical finesse only marred by technical ability of the troops under command, something that the Spartans would have mitigated earlier than most. Formal training will ensure better discipline and cooperation between units and significantly this will have only been available to the Spartans, retained units, formations on campaign and mercenary units.

Overall armies would have seen a signifiant improvement in professionalism over the centuries as well as developing tactics as new enemy troop types appeared and weapons restrictions relaxed. Control (or lack of it) would seem to be the biggest factor - but Hoplite units were still able to carry out a rapid & aggressive charge, and one that would not usually be replicated on the wargames table.

It is likely that the typically Open order style of combat of the Archaic Period was substituted by a Loose order as spears became more common and that this was further modified by lesser armoured units being able to form tight defensive formations. The movement restrictions on Close formation foot on the wargames table do seem unrealistic at best. Even the later Pike Phalanx was able to manoeuvre in a 'Loose order' on the battlefield, only tightening up when the tactical need arose.

Background Information
For more general information on an introduction to Ancient Greek History from its origins, through the Dark Age and beyond there is an interesting series of lectures on the subject by Donald Kagan available on YouTube.
google-site-verification=9Ce-OzNVLVXTkzi54GGWNnZ4VorBDbFs8L2W7DDjrLw